Great review on Power of Prog!

Thanks a lot Robert Brady for your great 5/5 review on Power of Prog!!!

Italy has had a very long standing tradition of invention, innovation and engineering. They have used these principals in industry, the arts and sciences and even within the parameters of music. Italian people have a uncanny ability to exert minimal effort and yield maximum results. IfSounds totally fits this definition especially where their 2015 album Reset is concerned. For only five members in ifSounds, their sound gives the listener that there is far much more going on than there really is.

Now to be honest there have been bands in the past use very minimalist elements and come out with a fully layered and warm project. It began with Krautrock in Germany in the late 1960’s to early 1970’s and has continued to more recent genres such as post rock with TOOL and even post metal bands. However ifSounds is one of those bands that come along with the talent enough to blend all those styles I mentioned before, styles that all now have found themselves within the progressive rock/metal banner.

“ifSounds are the images of our dreams and our nightmares. Music is just the shape we give to our stories, our hopes and our fears.” This is how the band describes themselves over on their website. From my observation this could be somebody’s reality or situation with a family member, co worker, boss, friend, etc… ifSounds lyrical content matches the emotion of the instrumental content to a point where people can have time for self reflection. Although their music may not speak to the almost 7 billion people on Earth, it certainly has the quality for those with a opened minds and hearts of objective perception.

Here is a some highlights from Reset.

When I Was Born Again comes in slowly like a impending thunderstorm with the keyboards. Soon the bass heavily comes in and takes the song in another direction. By the time the band comes in with all their parts between the vocal and instrumental there is a minimalist vibe about it. IfSounds have a excellent disposition. They appear to channel early TOOL and Radiohead with a heavier progressive side to the track. This song has a very dark appeal to it. The track ends with a beautiful harmony vocally.

FR9364 opens with some serious drum hi hat work and executed quite well by Lino Mesina . As he carries the heavier progressive passages, the keyboards come in with a sweet ambient sound that gives the song a wash of ambient flair. In some backhanded way the track reminds me of 1970’s WAR with Low Rider with heavier progressive elements.

40-14 is another straight away heavily executed drum/bass rhythm section that is soon matched by a slightly tuned down rhythm guitar. 40-14 is almost like a progressive version of The Who’s My Generation meets much of what the Ray Davies was doing with the kinks. Half way through this track it takes on a heavy heavy psychedelic progression much like in the early Pink Floyd meets Velvet Underground. The band really continues to utilize heavy minimalist passages to perfection here.

Laura begins with a beautiful mandolin with wonderful warm vocals. It is very heavily influenced on the more folk and classical elements. The tracks takes on a real heavy vocal harmony almost like a small choir based folk track like what was coming from New York in the early to middle 1960’s.

I’ve Never Hated Anyone is certainly the anomaly of Reset. This track contains more in your face bombastic elements both in the instrumental and vocal. There is anything from straight away hard rock elements to even very light punk elements. This is also the most metal track on Reset. Finally about the mid point of the song it takes a more progressive hard rock approach with great melody and harmony.

Run Away opens with a beautiful warm and inviting acoustical guitar passage that is soon met in harmony with warm vocal melodies. This track is really led more by the rhythm section of bass/drum and the lyrical content about it. The keyboard at times acts like another guitar in the song.

Flashback opens up with a very Cream like guitar riff. bass and drum rhythmic section. This track is very much rooted in the blues at the start before getting slightly psychedelic. This is very 1960’s old school Prog Rock Italiano. The vocals really carry it.

Fading To Blue opens to a warm almost in the fashion of early darkwave acts like Bauhaus and The Churchyet with a 1970’s progression like Popol Vuhl. The back up vocals are almost as instrumental as the warmth of the acoustic guitar. This track adds layers upon layers of various time signatures blended perfectly with the instrumental melodies. This is also a very heavy ambient track in nature.

Reset the namesake of the album opens up as a flow in segue effect from Fading To Blue with a heavy dark atmospheric progression. Reset is like the total collective of the various points that band has executed throughout the album. Reset opens with serious progressions and avant garde time signatures. For five members this track in particular sounds like their are much more members than there actually are. It goes back to the start of this where I said minimal energy maximum distribution.
The Tide continues in the vein of both Reset and Fading To Blue with the heavy atmospheric intro’s giving the listener the appearance that the last three tracks may be part of a trilogy. This is definitely heavy on the rhythm section. The Tide closes out the entire Reset album with a extended and wonderful guitar solo. The Tide is the perfect conclusion to Reset.

After a closer listen and spending much time with this album, I have concluded that ifSounds transcend typical progressive rock labels and cliche’s. They can definitely play on more than just a progressive rock live bill. IfSounds Reset gets a 5/5.

Another review from one of the most important European magazines, the Dutch ioPages.

Thanks to André de Waal and to our friends from Synpress44. 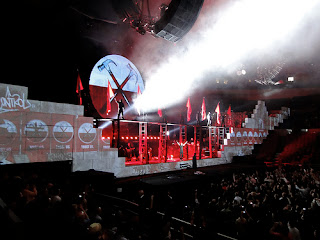 Seconda intervista in due giorni.

Grazie a Davide per la bellissima intervista e a Synpress 44 per la collaborazione.