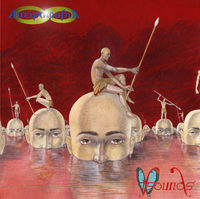 Apeirophobia is the fear of the infinite. It could be described as “4th dimensional agoraphobia”. It is something that runs even deeper than the fear of death itself. The human brain can’t really cope with the concept of endless time and when we try to define infinity our destiny often seems to be an endless, obscure, unknown and frightening cage. It is in these moments that we suffer from Apeirophobia. While the fear of death is a basic instinct, Apeirophobia is more of a mental “short-circuit”. Most forms of philosophy and religion have tried to address the problem of the infinite in an attempt to bring this fear under control and this album is about how some of them have “filled the void”, shaping human thought throughout the centuries.

Behind the wings of the butterfly – Inside Morpho Nestira. (12)

12. Oceans of Time.
Is there still life where is empty? I think yes: our souls still have the need to resist, fighting to reach the highest goals. We have to fight the poison of corruption to elevate our souls, to conquer our Time again.
Oceans of Time is about this fight and starts with optimism. I used “noises” from football to give a simple and easy to recognizable shape to the happiest moments we share with other human beings.

On the left you can hear the supporters of the ACD Petacciato, the club of my village; on the right there’s the goal scored by Fabio Grosso in the 2006 WC on the Spanish TV Cuatro. In the middle you can hear Jordi Orriols who tells us how we can reach a superior consciousness: “…you’ll feel the need to stand up, to go up to see better, so you decide to climb a mountain. You’ll need to learn breathing again, because the air is lighter there, and you have to be careful to your steps, you could easy fall… it’s a difficult way and you’ll see a lot of people giving up: someone is tired, someone is lazy, others simply believe they can’t…”.

Now starts the song: metamorphosis took other direction, converting ourselves in hungry monsters. But we’ve got inside the strength that will drive us to reach a new and full spiritual conscience, and we’ll finally reach our Shangri-La where we’ll have Oceans of Time.

Trivia:
A football legend from Argentina was one of the speakers for the Spanish TV Cuatro during the WC 2006. Who?